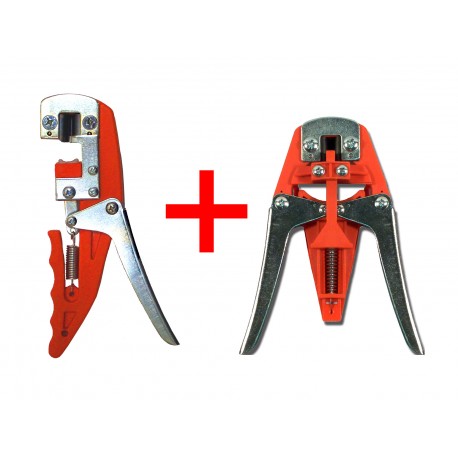 The Manual Grafter 3T is a clamp that can perform three types of grafting: Notch graft, Omega graft and Bud graft.

The Complementary Grafter allows to effect the crown-graft on the plants until 45mm. of diameter. It is used combined, couple the Manual Grafter 3T.

The Manual Grafter 3T is a clamp that can perform three types of grafting : Notch graft, Omega graft and Bud graft. With a single grafting can achieve all three models of cutting as it has interchangeable blades, simply by unscrewing the two screws located on the head can be mounted to the desired blade. The types of coupling are three in order to meet various needs of plants that respond differently when they are cut, so you can operate on fruit trees, vines, kiwis, flowers etc. ...

For example, fruit trees runs the cutting Notch because these plants have little sap and only through this form of recording the sap can go up faster and allow the graft to attach to the mother plant (rooting) . The cut Omega instead is more suitable for vines, kiwi and for all those plants that once cut a lot sap flow (it is said that crying) and that for this reason they tend to push the graft out of the rootstock . Thanks to the shape of this incision is going to overcome this drawback because the terminal part of the cut is wider to go then to tighten in the neck and in this way you get a kind of piece of a puzzle that, once inserted laterally into the door coupling, will not run the risk of being pushed out of the abundant sap. The last type of graft is the Bud graft also known as "shield" that removes a side portion of the plant where there is the gem, is especially suitable for fruit trees and run mainly in the summer months.

To perform the grafting process is simple: you make a cut on the mother plant getting a male and a female, the male is eliminated. You take the scion and run a cut as before but this time the two parties you throw the female. All that remains now unite the male and female as well obtained by matching the two cortices.

It is important that the mother plant there is always the female because it is the plant that receives and that this is never smaller than the scion, it larger or the same size. Indeed, even if the graft is smaller than the parent plant, it is sufficient to fit the two parts on one side only so that the barks are aligned as part of the bill (that is where the exchange takes place in lymph) remains exactly under the bark same. Last trick is to choose a scion of about 12 cm and check that you have at least 2/3 gems.

It is also important to remember that despite the cut is very precise, the graft thus obtained should always be tied and finished because what we have done is still an open wound on the plant that is healed. To do this there are a multitude of products on the market paraffin wax, putty Beeswax for healing raffia and ribbons to tie.

Thanks to this clamp can be performed even on small plants or grafts on young branches with great accuracy, it is necessary to sever the whole plant with the advantage of being able to save in the case of the graft to fail.

The clamp is very durable because it has a steel core and glass-filled nylon body, the only thing that will wear out over time is the blade, being interchangeable, can be purchased after purchase basis.

The Complementary Grafter allows to effect the crown-graft on the plants until 45mm. of diameter. It is used combined, couple the Manual Grafter 3T. Both the Grafters use the same blades of cut for which rapid and sure grafts will be had.

The pliers is used to perform what in nature is called "plug-in crown," this mode of grafting is practiced on plants with 3-4 years of life and they obviously have a trunk size of which varies from 25 to 45mm. about to engage these plants are to be used both grafters (AR-INN3T+AR-INNCOMPL)

Both Grafters use the same cutting blades because otherwise there would be no compatibility between the two cuts made, using the same blades will have quick couplings and safe.